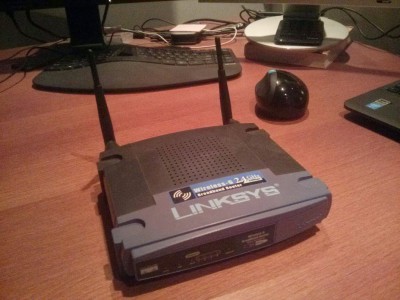 I decommissioned a fine piece of hardware today. This access point brought the first wireless connectivity to my place. It’s been in service for more than 11 years, and is still fully functional.

In the past years, the device has been running OpenWRT, which is a really nice and very powerful little Linux distribution specifically for this kind of routers. OpenWRT actually sprang from the original firmware for this device, and was extended, updated, improved and made available for a wide range of hardware. OpenWRT lately has made this piece of hardware useful, and I’m really thankful for that. It also a shows how much value releasing firmware under an Open Source license can add to a product. Aside from the long-term support effect of releasing the firmware, updated firmware would add features to the router which were otherwise only available in much more expensive hardware.

The first custom firmware I ran on this device was Sveasoft. In the long run, this ended up not being such a good option, since the company producing the software really stretched the meaning of the GPL — while you were technically allowed to share software with others, doing so would end your support contract with the company — no updates for you. LWN has a good write-up about this story.

Bitter-sweet gadget-melancholy aside, the replacement access point brings a 4 times speed increase to the wifi in my home office: less finger-twiddling, more coding. :)