One of the things that take care of internationalization of Plasma is the locale. Locale is a container concept that includes Wikipedia defines Locale as “a set of parameters that defines the user’s language, country and any special variant preferences that the user wants to see in their user interface”. There have been some changes in this area between Plasma 4.x and Plasma Next. In this article, I will give an overview of some of the changes, and what it means for the user. I’ll exclusively talk about the locale and although there is some overlap between Locale and Translations, I’ll concentrate just on the locale for now. 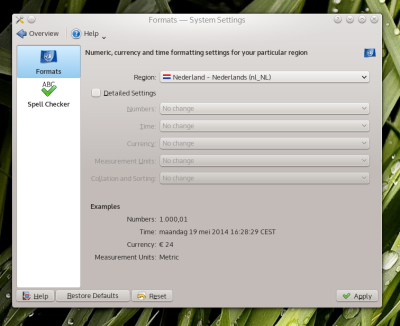 In Qt5, the locale support has seen a lot of improvements compared to Qt4. John Layt has done some fantastic work in contributing the features that are needed by many KDE applications, to a point where in most cases, KLocale is not needed anymore, and code that used it can now rely on QLocale. This means less duplication of code and API (QLocale vs. KLocale), more compabitility across applications (as more apps move to use QLocale), less interdependencies between libraries, and a smaller footprint.
This is one of the areas where porting of applications from KDE Platform 4.x to KDE Frameworks 5 can cause a bit of work, but it has clear advantages. KLocale is also still there, in the kde4support library, but it’s deprecated, and included as a porting aid and compatibility layer.

In Plasma, we have already made this transition to QLocale, and we’re at a point where we’re mostly happy about it. This also means that we had to revisit the Locale settings, which is probably the single component that is most visible to the user. Of course the locale matters everywhere, so the most fundamental thing is that the user gets units, number formats, currencies and all that presented in a way that is familiar and in line with overall regional settings. There’s a bunch of cases where users will want to have more fine-grained control over specific settings, and that is where the “Formats” settings interface in systemsettings comes in. In Plasma 4.x, the settings were very much based on either using a common setting and overriding specific properties of that in great detail. You could, for example, specify the decimal separator as a string. This allows a lot of control, but it’s also easy to get wrong. It also does not cover all necessary cases, as the Locale is much more subtle than can be expressed in a bunch of input boxes. Locale also has impact on sorting, collation of strings, has its own rules for appending or prepending the currency.
QLocale, as opposed to the deprecated KLocale doesn’t allow to set specific properties for outside users. This is, in my opinion, a valid choice, and can be translated in a fashion that is more useful to the user as well. The Formats settings UI now allows the user to pick a regional/language setting per “topic”. So if you pick, for example “Netherlands” for currency, and United States” for time, you’ll get euros, but your time will display with AM/PM. So UI has moved, so to say to using a region and language combination instead of overriding locale internals.

The mechanism we’ve put behind it is simple, but it has a number of advantages as well. The basic premise is that systemsettings sets the locale(s) for the workspace, and apps obey that. This can be done quite easily, following POSIX rules, by exporting variables such as LANG, LC_CURRENCY, LC_TIME, etc.. Now if the user has configured the locale in systemsettings, at next login, these variables will be exported for apps that are run within that session to be picked up. If the user didn’t specify her own locale settings, the default as set by the system is used. QLocale picks up these variables and Does The Right Thing. A “wanted side-effect” of this is that applications that do not use QLocale will also be able to pick up the locale settings, assuming they’re following the POSIX standard described above. This means that GTK+ apps will follow these settings as well — just as it should be within the same session. It also means that if you run, for example LXDE, it will also be able to have apps follow its locale, without doing special magic for Qt/KDE applications.

In Plasma, we have traditionally relied on the font settings dictated by the distribution we run on. This means that we’ll take whatever “Sans” font the distro has set up (or has left to something else), and worked with that. The results of that were sub-optimal at least, as it meant we had almost no control how things are going to look like for end users. Fonts matter a lot, since they determine how readable the UI is, but also what impression it gives. They also have effect on sizing, and even more so in Plasma Next.

Many widgets’ size in a UI depend on the font: Will this message actually fit into the allowed space for it? (And then: What about a translated version of this message?) In Plasma Next, we’re relying even more on sensible font settings and metrics in order to improve our support for HighDPI displays (displays that have more than 150 dots per inch). To achieve balance in the UI sizing, and to make sizing based on what really matters (how much content fits in there?), we’ve put a much stronger emphasis on fontsize-as-rendered-on-a-given screen. I’ve explained the basic mechanics behind that in an earlier post, so I won’t go into too much detail about that. Suffice to say that the base unit for our sizing is the height of the letter M rendered on the screen. This gives us a good base metric that takes into account the DPI of the screen, but also the preference of the font as set up by the user. In essence, this means that we design UIs to fit a certain number of columns and rows of text (approximately, and with ample dynamic spacing, so also longer translations fit well). It also means that the size of UI elements is not expressed in pixels anymore, and also not relative to the screen resolution, but that you get roughly the same physical size on different displays. This seems to work rather well, and we have gotten little complaints about sizing being off.

Relying on font metrics for low-level sizing units also means that we need the font to actually tell us the truth about its sizing. We need to know for example, how many pixels a given font on a given screen with a given pointsize will take, and we need this font to actually align with these values. This sounds quite logical, but there are fonts out there who don’t do a really good job in telling their metrics. This can lead to over- or undersizes UIs, alignment and margins being off, and a whole bunch of other visual and usability problems. It also looks bad. I find it personally quite frustrating when I see UIs that I or somebody else has spent quite some time on “getting it juuuuuust right”, and then seeing it completely misaligned and wrongly sized, just because some distro didn’t pay enough attention to choose a well-working (by our standards, of course ;)) font.

So, to mitigate these cases, we’ve chosen to be a bit more bold about font selection in Plasma Next. We are now including the Oxygen font and setting it up as default on new installs. This means that we know the defaults work, and they work well across a range of displays and systems. We’re also defaulting to certain renderer settings, so the fonts look as smooth as possible on most machines. This fixes a slew of possible technical issues, but it also has a huge impact on esthetics. By setting a default font, we provide a clearer idea of “with this setup, we feel it’s going to look just right”.

For this, we’ve chosen the Oxygen font, which has been created by Vernon Adams, is released under the SIL Open Font License and has been created under the Google webfonts project. It’s a really beautifully done, modern, simple and clean typeface. It is optimized for rendering with Freetype, and it mainly targets web browsers, desktops, laptops and mobile devices. Vern has created this font for Oxygen and in collaboration with some of the Oxygen designers. The font has actually been around for a while already, but we feel it’s now ready for prime-time, so limelight it is.

As it happens with Free software, this has been a long-lasting itch to scratch for me. One of the first thing I had to do with every install of Plasma (or previously, KDE 3 even), was to change the fonts to something bearable. Imagine finishing the installer, and being greeted with Helvetica — Barf. (And Helvetica isn’t even that bad a font, I’ve seen much worse.) I’m glad we could fix this now in Plasma Next, and I’m confident that this will help many users having a nicer looking desktop without changing anything.

Apart from the technicalities, there will always be users who have a strong preference for a certain font, or setting. For those, we have the font selection in our systemsettings, so you can always set up your personally preferred font. We’re just changing the default.