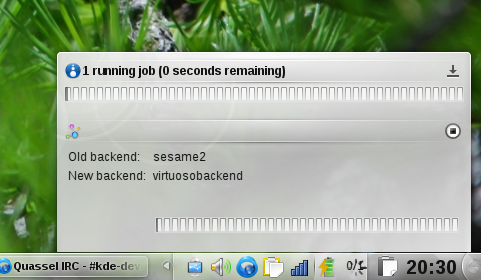 Nepomuk, which is KDE’s semantic desktop framework is a very interesting new technology, and has the potential to move many applications forward. Nepomuk needs an RDF store to save and retrieve semantic information, such as data from your filesystem indexer, tags, ratings, and other, much more complex bits. Up until now, there were performance problems. There were two possible ways to store your information: redland and sesame2. Redland is written in C++, but is very simple and by far not meeting the performance requirement we need for Nepomuk’s use-cases. The Sesame2 backend is a lot better in terms of performance, though still not quite up to the task. What is more, it requires certain Java files which have licensing problems — in the end many distributors just omit shipping this backend. That way performance of Nepomuk goes from bad to worse for many users.
Sebastian Trueg, KDE’s main developer of the Semantic Desktop is of course aware of this problem, so he has been working hard to find a solution for the RDF storage part which is both up to the task in terms of performance and stability. This solution is Virtuoso, and Sebastian has now a working backend for Soprano (which is the Qt-style storage interface for Nepomuk). This means that the Redland or Sesame2 storage mechanisms for Nepomuk can now be replaced by the much faster Virtuoso store. For the user this has important advantages: faster search, tagging, rating and longer battery life on mobile devices.
So my project for tonight was: Switch the Nepomukserver on my development machine to Virtuoso. And apparently, I succeeded.

Here’s my quick walkthrough if you want to do the same:

This worked for me. I was glad to find information on The Other Sebastian’s blog and on techbase.

5 thoughts on “Virtuoso, here I come!”